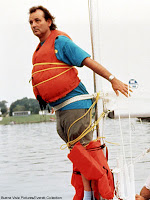 Have you ever known anyone who is obsessive-compulsive? People who have issues with germs, avoiding stepping on lines, making sure the stove is turned off, or checking multiple times to make sure the front door is locked? When I think about these type of people, I instantly recall the classic movie What About Bob, where actor Bill Murray plays the character Bob Wiley who is pretty much obsessive-compulsive about anything and everything. Talk about a guy with issues, sheesh.

While a lot of people in today's world may have issues such as these, there are also a number of people out there who perhaps have a milder form of just plain being obsessed with their work, their calling, their marriage, their kids, or money management. When they wake up in the morning until they go to bed at night, this is what they are thinking about. They constantly obsess about how they can be a better parent, how they can do a better job at work, or how they can build a better product for their business.

Of course, obsessed people like this are walking a fine line. If they stray a little to either side, they will go crazy with their obsession. They will become unbalanced and out of control. They constantly need accountability from others to keep their obsession in check, otherwise their relationships with others become strained and other important parts of their lives are neglected. There are occasions where it may be acceptable to be a little out of control and most other times probably not so much.

It would seem that the people who have accomplished some amazing things in life have the tendency to be obsessed. I mean, think about it. Thomas Edison was obsessed with creating a number of different inventions, most notably a more efficient electric light bulb. His obsession with an improved electric light bulb led to some 1500-2000 experiments until he was satisfied with his final outcome.

The Wright Brothers were obsessed with the idea of powered, manned flight, and they spent 3-4 years with various experiments until they accomplished their famous flight at Kitty Hawk in 1903. In that same year, Dr. Horatio Nelson Jackson became obsessed with being the first to drive an automobile from coast-to-coast across the United States.

The list of obsessed people and astonishing inventions, products, and companies could go on and on. All  of these people have accomplished incredible things due to an obsession and focus on great ideas.

Being obsessed with an idea, a product, or a business has a cost, though. That cost is usually in the form of time, energy, money, and relationships. It takes a lot of time, personal energy, and money to create light bulbs, airplanes, computers, software, and companies.

Unfortunately, many times, relationships are strained as a result of these obsessions. Marriages fall apart. Families are neglected. Children rebel against their parents. Friendships are destroyed. Again, those who are obsessed are walking a very fine line of living a balanced life or one that is completely out of control.

The call of Christ is a call to obsession. As followers of Jesus, we have been called to love God with everything we've got. Our lives should have a new focus on accomplishing God's Kingdom work. We can't play it safe anymore. We have to go all out for Jesus. It's an all or nothing kind of deal. You become obsessed with your Christian walk or you fall by the wayside. Perhaps, those who abandon their walk are just posers, you know, pretenders of the faith.

This calling to follow Jesus is no easy task. Consider our Lord's own words from the New Testament on the call to follow Him:


Then he said to them all: “Whoever wants to be my disciple must deny themselves and take up their cross daily and follow me. For whoever wants to save their life will lose it, but whoever loses their life for me will save it” (Luke 9:23-24).

As Jesus started on his way, a man ran up to him and fell on his knees before him. “Good teacher,” he asked, “what must I do to inherit eternal life?” “Why do you call me good?” Jesus answered. “No one is good—except God alone. You know the commandments: ‘You shall not murder, you shall not commit adultery, you shall not steal, you shall not give false testimony, you shall not defraud, honor your father and mother.’” “Teacher,” he declared, “all these I have kept since I was a boy.” Jesus looked at him and loved him. “One thing you lack,” he said. “Go, sell everything you have and give to the poor, and you will have treasure in heaven. Then come, follow me.” At this the man’s face fell. He went away sad, because he had great wealth. Jesus looked around and said to his disciples, “How hard it is for the rich to enter the kingdom of God!” (Mark 10:17-23).

Following the Lord requires a great deal of sacrifice. This sacrifice may include relationships with certain family members and friends. Or, the personal sacrifice may be financial wealth given back to God as a demonstration of an obsession with God's Kingdom rather than temporal stuff. And, some Christians may even be called upon to give their very lives as they follow the Lord.

Are you obsessed with God's Kingdom? Are you loving God with everything you've got? If so, how are you demonstrating that obsession in your Christian walk?
Also, check out these related posts: