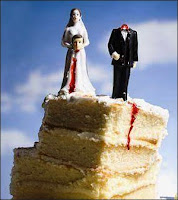 From the outset of this post, I'll be straight-up honest with you. This is going to be a difficult post for me (note: I've been tinkering around with this particular post for months; that's how difficult this has been to write!). I'm a perfectionist by nature, and I don't like to fail. Plus the fact that what I thought was not in the realm of possibility, suddenly became my new reality. Also, I'm an ordained pastor and write regularly on living the rich Christian life and the importance of relationships in living out that life.

If you have been a regular follower of this blog, you have probably noticed that I have eluded to a time of great difficulty that I have been experiencing. For almost two years, I have struggled through one of the most painful periods in my life. I have experienced the grief process in a major way as I have cycled through numerous times the five stages of the grief cycle: denial, anger, bargaining, depression, and acceptance.

OK, so here's the dirt. Beginning in April of 2009, I discovered that my wife was done with married life and wanted her freedom. I won't go into the specific details of why, but all I will say is that I was committed to a lifetime of marriage. I had no desire for a separation or divorce. When I took my marriage vows in January of 1999, I meant every word: "For better or worse, for richer or poorer, in sickness and in health. And forsaking all others, be faithful only to her/him so long as you both shall live?" Apparently, my ex-wife only believed those words until they no longer suited her purposes, but I can't get inside her head and speak for her. I can only tell you my story from my own perspective.

Although I recognize that I played a role in my marriage problems and for that I will always have specific regrets, I can also celebrate the fact that when I finally did realize that there were major problems, I did everything possible to save a doomed marriage. I know for absolute certainty that many men who would find themselves in my exact same situation would immediately throw in the towel and move on, but I attempted to save my marriage because according to His Word, God hates divorce. In Malachi 2:15-16 we read,

For over 18 months, I delayed, kicked, and screamed my way into family court so that the Holy Spirit would have time to work in my life as well as on the heart of my ex-wife. For whatever reason, the prayers of thousands of people across America were not answered in the way that we had specifically prayed and hoped. I don't understand why God could allow my family to fall apart right before my eyes.

The challenge for every marriage is that it takes two committed, unselfish, loving people to make the relationship work. It only takes one person in the relationship to throw in the towel and give up. Each and every one of us has a free will. We can choose to take the right path for our lives, or we can choose to live in the flesh.

God's faithfulness through the difficulty

As I have traveled on this journey, I have been reminded of God's faithfulness to His children. He has never promised us that our lives would be problem free once we have been adopted into His family. He never promised that we would always be living out our Best Life Now

while inhabitants of planet earth. But, He has promised to be with us through the trials and tribulations of this life.

In Lamentations 3, the prophet Jeremiah cries out in a poetic lament of hurt and pain for all the garbage he has had to endure as God's prophet to the stubborn, disobedient nation of Judah. As Jeremiah goes through his litany of problems and complaints, he is suddenly reminded of the hope that he has in the Lord:


I remember my affliction and my wandering, the bitterness and the gall. I well remember them, and my soul is downcast within me. Yet this I call to mind and therefore I have hope:

Because of the LORD’s great love we are not consumed, for his compassions never fail. They are new every morning; great is your faithfulness. I say to myself, “The LORD is my portion; therefore I will wait for him.”

The LORD is good to those whose hope is in him, to the one who seeks him; it is good to wait quietly for the salvation of the LORD (Lamentations 3:19-26).

I wouldn't wish what I have gone through on my worst enemy. I have deep psychological and emotional scars from my experience that will probably last my entire lifetime. Even though the last two years have been extremely difficult, I can truthfully and thankfully say that God has used this experience to change me. As a result of the hurt and the pain, I believe I have allowed God to draw me closer to Him as I have rested in His love. I have learned to be dependent on Him as my source of strength and provision. I can truly say that I am thankful for what the Lord has taught me and continues to teach me through the experience.

In my next post later this week, I will go into greater detail on the lessons I have learned on my journey. Stay tuned.