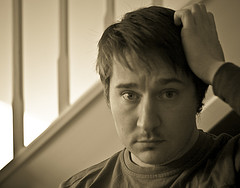 For those of us who grew up in Bible-believing and preaching churches, we have most likely heard lines such as "faith in Christ alone" leads us to salvation as well as "once saved, always saved." While I do believe in these foundational principles of the Christian faith, I also believe many so-called Christians want to use these principles as their "golden ticket," so to speak, for fire insurance from eternal damnation. They want to tack God onto their lives, but they don't really want to be transformed into a new life.

If you completely ignore some or all of these salvation sayings and read through the New Testament with an open heart and mind, though, you would most likely come to a different conclusion of what salvation and the Christian life is all about. Salvation is not based on saying a prayer and then moving on with a life still lived out in the flesh.

Faith And Action Go Together

Consider the following passage from the Apostle James regarding what living out a life of faith should really look like in the life of a believer in Jesus Christ.


What good is it, my brothers and sisters, if someone claims to have faith but has no deeds? Can such faith save them? Suppose a brother or a sister is without clothes and daily food. If one of you says to them, “Go in peace; keep warm and well fed,” but does nothing about their physical needs, what good is it? In the same way, faith by itself, if it is not accompanied by action, is dead. But someone will say, “You have faith; I have deeds.” Show me your faith without deeds, and I will show you my faith by my deeds. You believe that there is one God. Good! Even the demons believe that—and shudder. You foolish person, do you want evidence that faith without deeds is useless. Was not our father Abraham considered righteous for what he did when he offered his son Isaac on the altar? You see that his faith and his actions were working together, and his faith was made complete by what he did. And the scripture was fulfilled that says, “Abraham believed God, and it was credited to him as righteousness,” and he was called God’s friend. You see that a person is considered righteous by what they do and not by faith alone. In the same way, was not even Rahab the prostitute considered righteous for what she did when she gave lodging to the spies and sent them off in a different direction? As the body without the spirit is dead, so faith without deeds is dead (James 2:14-26).

In the words of Forrest Gump, faith and action go together like "peas and carrots." You cannot have a deep, abiding faith in God without some type of action that takes place as a result of that faith. In this passage from James, he claims under divine inspiration of the Holy Spirit that a faith without deeds is useless. Our actions prove as evidence that we do have faith. If we have no actions to back up our faith, then our faith is dead. We are not true believers in Jesus Christ. We are fakes.

Good Deeds Don't Save Us

The challenge with a passage such as we just read in James 2 is that we can easily start heading down a path of a works-based salvation, which is not the intention. Our belief must be rooted in a faith in Christ's redeeming work on the cross alone. But once we have accepted Christ as both Lord and Savior, there should be a life-altering change through the indwelling of the Holy Spirit that takes place in our life. Living out a life of action from the point of salvation is proof or evidence that transformation has taken place. Action in good deeds should simply be an outgrowth of our faith in Christ alone to save us.

So, here are some questions that you should perhaps ask yourself, today: Do my actions support my faith? If a random person were to examine my life right now, would they see that my life that has been radically transformed by faith in Christ? If being a Christian were a crime here in the United States, would there be enough evidence of action in my life to convict me of being a follower of Jesus?