Considering the Tithe as a Baseline Metric for Giving 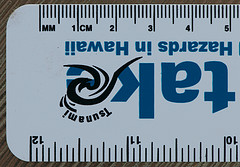 Last week, I wrote a post on The Great Debate: to tithe or not to tithe. As expected, I received a few comments from people who want to argue about the principle of the tithe and the Christian life. First, I know that the principle of the tithe is not a requirement for salvation. There is nothing that I can do, there is nothing that you can do to inherit God's favor and eternal life. "All have sinned and fall short of the glory of God." I also understand that the tithe was a requirement of Old Testament Law. God laid out the Law for the Israelite people to follow a set of rules. Many of these laws described in detail a sacrificial system as well as the giving of tithes and offerings. I'm not arguing this point. I'm not trying to say that Christians need to follow a set of legalistic rules.

OK, I get it. You're preaching to the choir. I'm a minister for St. Peter's sake. Sheesh. Cut me some slack.

But, I'm also a stewardship pastor. My role at my church is moving people in the direction of wise, Biblical financial management and generous giving because 100% of everything we have is God's in the first place. We are simply managers of His money. I look at financial and giving statistics at my church as well as across the country on a regular basis, and I see a lot of people who are making decent money (they are rich by the world's standard) and are giving very little to their churches. I believe that God has established the church body to be the vehicle through which ministry should be accomplished.

Those of us who are church leaders have done a poor job of teaching God's people sound financial principles that are found in God's Word. We have also failed in teaching that generous giving is a part of living the victorious Christian life. Through the process of generous giving, we as Christians begin to acknowledge that God owns everything (1 Chronicles 29:11-12) and that we are trustworthy managers of His money (Matthew 25:14-30). We begin to learn what true contentment (1 Timothy 6:7-9) and self-control (Galatians 5:22-24) is all about. We take our focus off of our earthly desires and through generous giving, we place our focus on God's Kingdom. I have great difficulty in saying that our church members are generous givers and focused on God's Kingdom if the average giving percentage is 2.5%. It would appear that Christians love money and materialism as much as those who are in the world. As believers in Jesus Christ, we are supposed to no longer be conformed to the world's standard (Romans 12:1-2).

Look At Tithing In A Different Way

Peter Drucker, the famous writer and management consultant, once said "what gets measured, gets managed." We live in a world that measures and manages many different things, and quite effectively I might add. People go to Weight Watchers and measure their weight each week and how many "points" they eat each day in order to lose weight. Some people set up exercise plans where they work out for so many minutes or run a set number of miles each day in order to stay healthy and trim. Many people have a target percentage they invest each pay period (typically 10-15%) into a retirement account so that they can build up a sizable nest egg for their retirement. Many Christians set aside a specific amount of time in their day to read their Bible and prayer in order to grow in their relationship with Almighty God. All of us have goals that we would like to accomplish, and the best way to accomplish these various goals is to take action and measure our progress along the way.

I view giving in my life in a similar light. I need to make a decision on a specific amount I should give (2 Corinthians 9:6-8) and then follow through with that decision. As I grow in my walk with Christ, as I fall more in love with Him, this amount should grow on a regular basis. This growth can be measured in percentages. Whether we like it or not, if we will simply measure our giving, we will manage and hopefully increase our giving as we mature in our faith.

The Tithe Is Still A Useful And Effective Principle

I believe the tithe is a useful starting point for Christian giving. Again, please note, that I'm not saying it is a requirement. Tithing is a useful financial measurement to get us on the path to generous giving.

You know, I have heard numerous testimonies on tithing, and I have never heard one complaint or regret for giving at least 10% of one's income to support the ministries of a local church. In fact, in a majority of these testimonies, I have heard countless praise for a God who has blessed the tithe givers in amazing ways.

I believe the principle of the tithe still works whether you are a Jew or a Christian. If you are faithful to give back to the Lord at least ten percent of your income, God's blessing will fall on that individual or family (Malachi 3:10-12). I view the tithe as a universal principle that stands outside the Jewish Law or even the Christian faith. Will that blessing always be a monetary one? No, probably not, but God has promised to meet our needs as we make His Kingdom are highest priority (Matthew 6:33).

I do understand that American Christians are in a difficult economy right now here in the United States. These posts on giving and tithing have not been an attempt on my part to beat these financially strapped believers over the head about giving ten percent. But, there's a good chance that many Christians who are in a jam financially have been followers of the world's financial advice for the last several years. They have learned the hard way that the world's economic system doesn't work long-term. These posts have rather been an attempt on my part to teach that there is a better way. When we manage God's finances according to Biblical principles, God has promised to take care of our needs. I would contend that many Christian families would benefit greatly from a Crown Financial Bible study or Financial Peace University in this down economic cycle.

Through the blood of Jesus, Christians have been freed of the burden of following the Law, but does that exempt us from living holy lives? Does this exempt us from giving back to God? No, it does not. I do not see that anywhere in the New Testament. I do see, however, a lot of sacrificial giving of poor Christians who most likely gave beyond ten percent. They gave much because they loved God and their brothers and sisters in Christ. Can this truly be said of those of us in the American Church if our average giving is 2-3%. The real truth is that American Christians are horrible money managers for Almighty God. We're more interested in the American Dream than the Kingdom of God. Think about it.