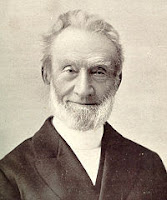 If you're not familiar with George Müller, his story is a fascinating account of faith in God's provision and stewardship of time, talent, and treasure.

I won't take the time in this blog post to recount Mr. Müller's entire history, but you can read his biography here in Wikipedia.

George Müller was an evangelist in England during the 1800's , who believed that God had primarily called him to help the orphans in the city of Bristol, and he also pursued other ministries such as pastoring a church and founding the Scripture Knowledge Institution for Home and Abroad, with the goal of aiding Christian schools and missionaries, and distributing the Bible. He made a vow with the Lord that he would not receive a salary from his church, government funding, be involved in active fundraising, and never go into debt. He completely put his faith and trust in God to meet all of his family's financial needs, as well as the ministries that he led.

Even though times were difficult in England, God's hand was on George Müller, and He supernaturally provided for him his entire life! It is estimated that during his lifetime, his organization received and disbursed £1.5 million ($2,718,844 USD) by the time of Müller's death, primarily using the money for supporting the orphanages and distributing nearly two million Bibles and religious texts. The money was also used to support other "faith missionaries" around the world, such as Hudson Taylor.

Not only was Mr. Müller an excellent steward, but he was also an excellent leader. More than a century after his passing, his work continues on through the George Müller Foundation.

George Müller's story can be a convicting one. How many Christians, especially those of us that live in the richest nation in the world, have that kind of faith? How many of us are that kind of manager of God's resources? I would say that all of us that claim the name of Christ could learn a lot from George Müller!
Posted by Unknown at 9:38 AM